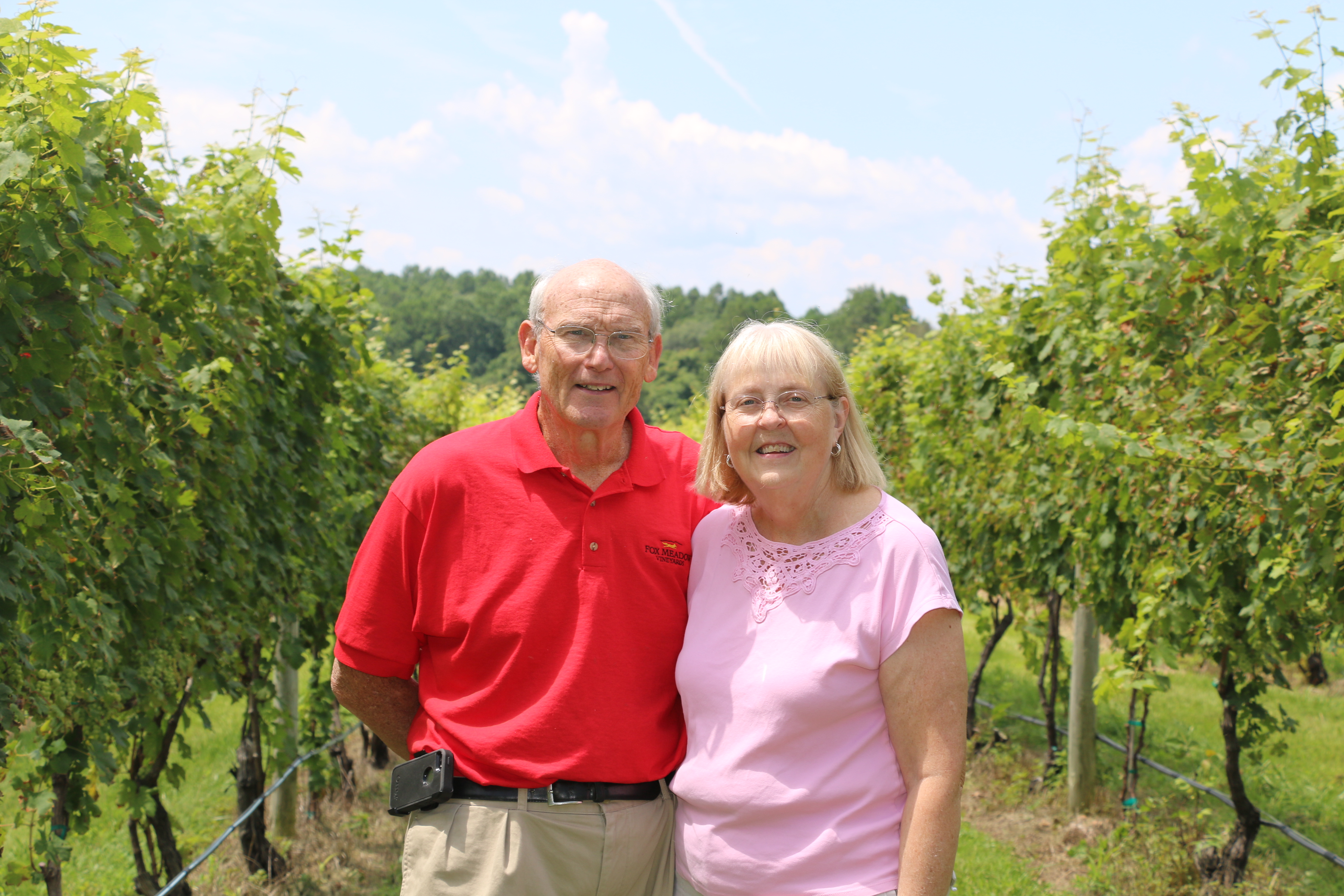 Dan and Cheryl Mortland are using their retirement for a new passion — wine making in Montgomery County, Virginia.

Dan Mortland met Cheryl Stark while walking from the library to Tippin Gym on his first day of classes at Clarion University in 1969. They’ve been together ever since.

Between their two families, they are part of four generations of proud Clarion alumni, beginning with Clarion Normal School.

Dan sold industrial supplies for a year before moving to a sales position with GTE Sylvania. After five years, he was recruited to work for company that manufactures printed circuit automation equipment. In 1990 Dan joined Kulicke and Soffa Industries, beginning in sales management and later holding director-level management positions. In his career, Dan had the opportunity to work in many areas of North America, Europe and Asia. He retired from K&S in 2006 to open the Fox Meadow Winery.

Cheryl remained in education for a while, but eventually she migrated to the business world, specifically computer education and training. Working with computer software and implementation allowed her to work with education for BOCES in New York state as they learned to use computers in the 1980s. Her last 13 years before retirement were as director of database management and project implementation for a subsidiary of Merck Pharmaceutical.

Dan grew up in Montgomery County, Virginia, outside of Washington, D.C., where his family owned a one-acre lot they used for summer camping trips. After his family stopped using the property, it was deeded to Dan.

Dan and wife Cheryl's life geographically positioned them enough of a distance from the property that they were never able to use it. The only time it crossed their minds was when the tax bill arrived in the mail each year.Then living in Philadelphia, the Mortlands drove to Virginia to tack up a "for sale" sign. Dan took the opportunity to show his wife places that were important to him as a child.

"We came to Front Royal and saw that there were wineries," Cheryl said. "We were starting to think about opening our own business after retirement, and we thought maybe a winery is something we'd like to do.

On the vineyard's website, the Mortlands tell the story of how they came to open a winery in Virginia: "Sixteen years ago we visited the area, and fell in love with northern Virginia. We visited some of the local winer-ies and realized that great wines can be crafted here. After an exhausting search, we found the parcel of land which is now known as Fox Meadow Vineyards. Fox Meadow was once part of Freezeland Orchard, which was almost 100 years old. We could immediately see the potential of this location. It had great possibilities. Once discovering the site, we enlisted some of the finest professionals in the region to consult with to develop Fox Meadow Vineyards. We have now been crafting great wines using traditional wine-making skills and processes for over a decade."

Along with consulting professionals, the Mortlands have attended wine-making seminars to learn the craft.

Son Bob manages the winery. They also employ professional winemaker Tom Payette, whose "understanding of the subtleties of winemaking and his palate are far beyond ours," according to Cheryl.

"Chardonnay is my favorite, and everywhere you go, it grows well," Cheryl said. "We wanted to grow merlot, but it doesn't grow well. Cabernet franc is the red grape that grows best here. Dan wanted Riesling, our son wanted Vidal."

The entire process of making and bottling the wine is done on site.

Budbreak – when the buds that become leaves emerge – is in April. In May, the vines get what looks like a tiny grape cluster, and it becomes the flower. A hot, dry summer is ideal weather for the grapes.The grapes aren't ready for picking until at least early September. Veraison refers to the change in color of the grapes. It's difficult to see that change in white grapes.

"When we see things are ripening, we start testing grapes," Cheryl said. "We have a procedure to go into the field and pull a berry off of the grape cluster. We try to get some from different parts of the cluster – the south side ripens quicker. We'll have a baggie full of grape berries; we crush that to get the juice, and we test for sugar and pH. We want to get a balance between them."

As grapes ripen, both the pH and sugar levels increase. The Mortlands keep an eye on the grape, the health of the vine and the weather. When the grapes are ready, they schedule a picking crew.

"We pick into 25-pound picking lugs, which are yellow plastic boxes. We put them in the field before the pickers get there," Cheryl said.

"With white grapes, we like to do cold pressing. We store them overnight in the wine cellar with the air conditioning on. Some wineries have a cold room, but we do not. The next day, we put the grapes in the press and squeeze the juice. We can get about two tons of grapes into our press. With white grapes, we put in the whole cluster."

Each pressing cycle takes about two hours. The press squeezes to a certain pressure, then it releases and tum-bles the grapes, then squeezes and releases, then tumbles. The pressure increases every time it squeezes.

Next, the juice is put into a tank, and chemicals to help the juice are added. The juice sits overnight, a part of the process called cold settling. During that time, solids settle into the bottom, where they are extracted and dumped. The juice is transferred to another tank the next day, where sugar and acid levels are adjusted, if necessary, and yeast is added.

"Most white wine ferments in the tank. Chardonnay ferments in a white oak barrel. The barrels hold 60 gallons, but with Chardonnay, we put in 50 gallons, as the juice bubbles as it ferments," Cheryl said. "We test the alcohol and sugar levels; the level of sugar determines when fermenting is done. Most white wines ferment in the fall, and we start bottling them in January."

"We want them warm when we start processing them," Cheryl said.

The grapes go into a crusher/destemmer, then they are placed into one-ton-capacity bins.

"They will ferment in the bins. That's how you get the red color – the skins are still there," she said. "Twice a day, we punch down. As fermentation happens, the skins rise to the top and make a crust. The wine is underneath. We use big, plastic shovels and push the skins into the juice."

During this process, the sugar and yeast are added. If the weather permits, the Mortlands move the bins outside during the day to keep them warm.

"When fermentation is done, the skins will be at the bottom, and the top will be bubbling. The entire contents of the bins go into the grape press to separate the skins from the wine," Cheryl said. "The next day we pump it into barrels."

Red wines age in the barrels from nine to 20 months. After bottling, red wine sits for another six months before Fox Meadow Winery offers it for sale.

"Winemaker Tom says if it's a well made red wine, it will be good for 10 years after the harvest," Cheryl said. "We're tasting 2005 wines, and they're still good."

When storing wine, the bottles should be placed cork down or on its side to keep the cork moist.

WHAT'S IN A NAME?

The Alcohol and Tobacco Tax and Trade Bureau, part of the Bureau of Alcohol, Tobacco, Firearms and Explosives, dictates how wines are labeled. Most wines are named after the grape if they are a single variety. Chardonnay must be at least 75 percent chardonnay, for example. If no variety of grape comprises more than 75 percent, it's a blend and gets a fanciful name, Cheryl said. One of the blends Fox Meadow Winery produces is Blue Mountain Mist, a white blend named for Virginia's Blue Ridge Mountains, visible from the vineyard. 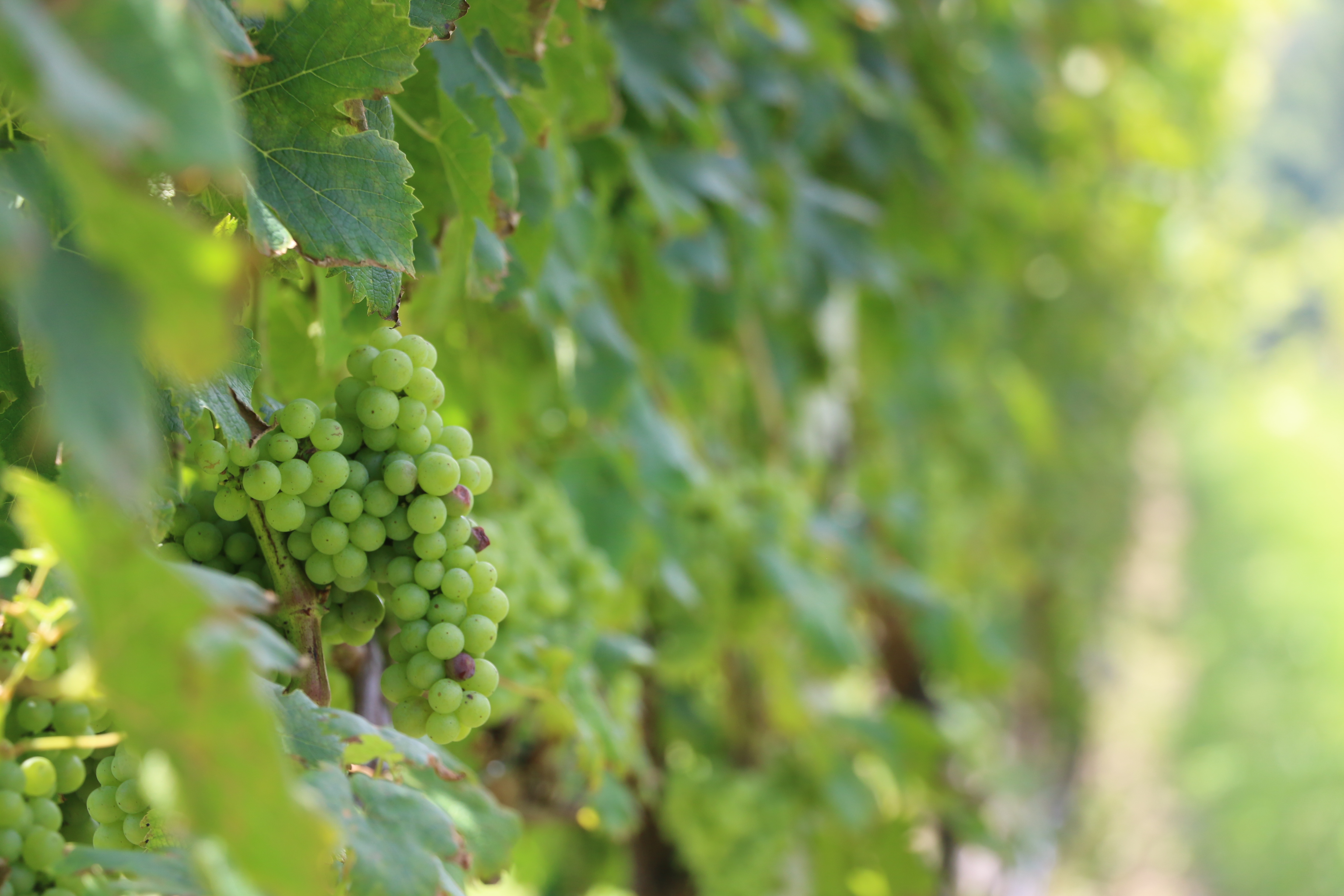 The Mortlands continue to learn the wine-making craft. Their vineyard in Virginia offers plenty of inspiration to do so. 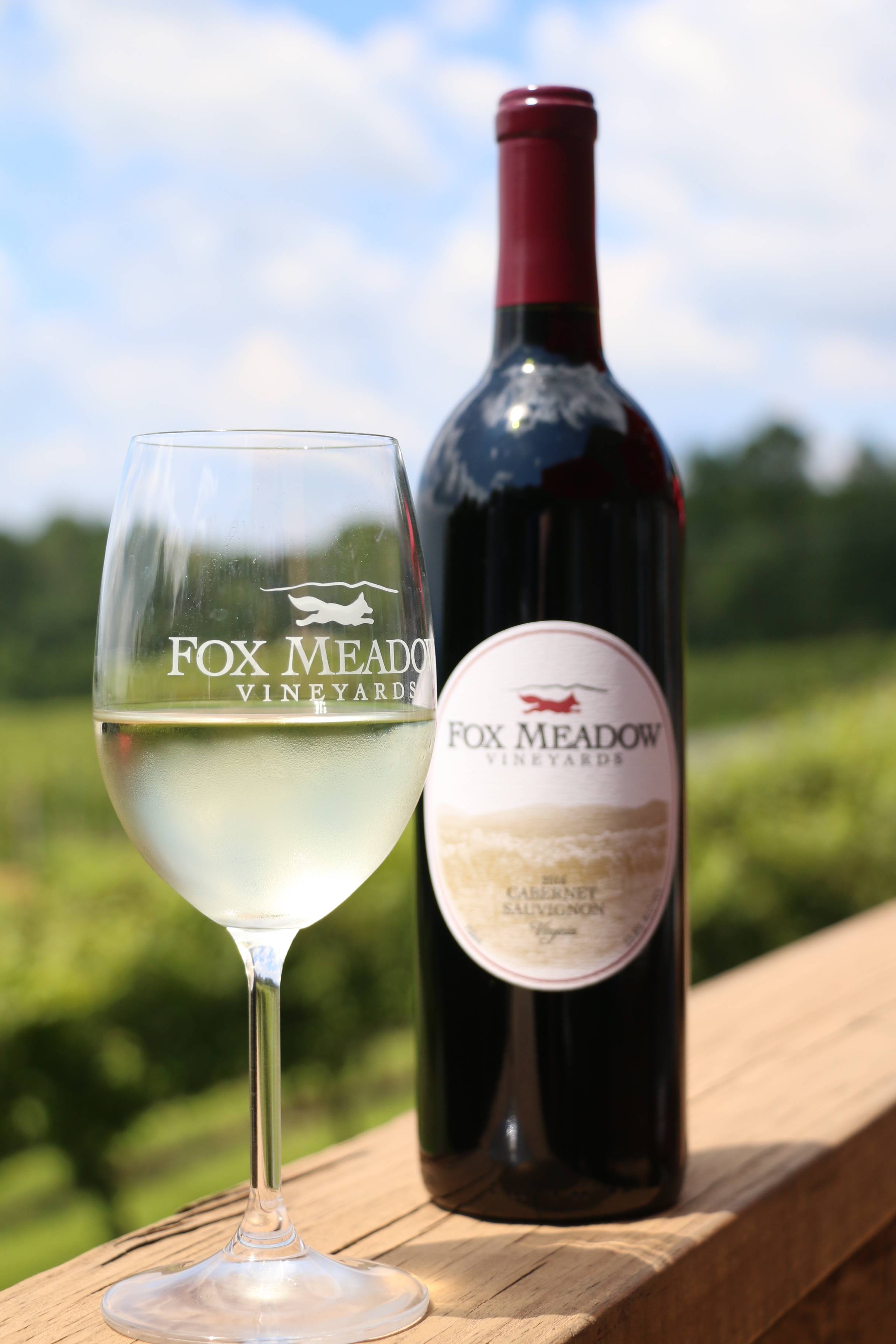 The Mortlands' wine is under the Fox Meadow Vineyards label.