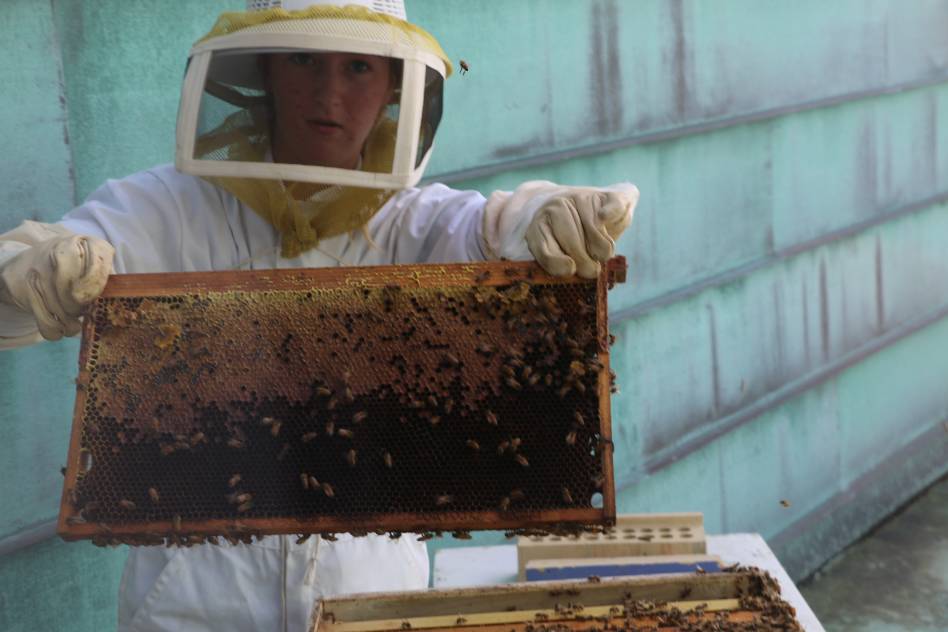 Riley Bessetti safely pulls some bees from the hive where they are busy making honey.

When it comes to keeping bees, you might say Clarion University junior Riley Bessetti is the queen.

Since last fall, with special permission, Bessetti has been keeping a hive on the third floor of the Grunenwald Science and Technology Center. As a molecular biology and chemistry double major, Bessetti has particular interest in the medicinal properties of propolis, a resin bees create from the buds of cone-bearing trees they use to form their hives.

In addition to propolis, Bessetti is interested in the healing properties of bee venom. Yes, venom.

Bessetti said venom is believed to have anticoagulant properties and promotes healing. Bessetti once sprained her ankle and allowed a bee to sting her in the area of her sprain. She said the bruising was reduced almost completely in less than a day.

Bessetti, whose left forearm bears a bee tattoo, said, "The thing I like about bees is how complicated they are. For such a small organism, there is so much to learn about them. They are truly fascinating."

She's not the only one who has found the appeal.

At the beginning of the semester, swarms of people like to check out the bees from behind locked doors. The bees go about their business of collecting pollen and making honey, while the queen lays eggs, growing the colony. Bessetti estimates that this colony, which started with between 2,000 and 5,000 bees, now has upward of 50,000 to 60,000 bees with 90 pounds of honey.

The first colony Bessetti started last fall died after a particularly wet season. Even though the colony died, it still yielded 45 pounds of honey. This year, her colony seems to be thriving, and it may even grow to the point of needing to be split.

In order to separate the hive, Bessetti moves frames of bees, eggs, nectar, pollen and the queen to the new box to simulate a nature swarm and, in response, the queenless bees raise a queen from the eggs left behind and feed on the remaining food.

"They're triggered by being queenless," Bessetti said.

Bessetti comes from a line of beekeepers. Her father, CU alum Joseph Bessetti ('95, molecular biology), taught her about beekeeping when he took it up as a hobby eight years ago.

"I got into it because of him. It was a hobby we could do together," Bessetti said. "I was always curious about it. My grandfather kept bees when I was a kid," Joseph Bessetti said.

Joseph Bessetti said his grandfather stopped keeping bees when his bees died, most likely of mites – a pest common to honeybees. His interest in keeping bees was piqued because he wanted to know what killed his grandfather's bees and if he could keep bees without the use of chemical treatments.

Having Riley as part of his hobby was a bonus.

Now that the semester is in full swing, people have gotten used to having the bees on the third floor balcony and only notice them when they're on their way to and from classes.

"People are typically nervous," Bessetti said of the bees.

Around the STC, you can find signs alerting people to the hive and stating there's nothing to fear.

The bees also got the attention of three of Bessetti's entomology classmates who were working on a project that can affect bees. They thought the access to beeswax could be beneficial to their project.

"They're typically found in hives not doing well," Bessetti said.

The wax in a bee colony is similar to polyethylene, the main ingredient in plastic shopping bags. The larvae like eating polyethylene, and are able to digest it. According to Bickel and Hobson, the idea is that the larvae will consume the plastic (which is overflowing landfills), then be fed to chickens, provided that harmful plastic byproducts don't remain in the larvae.

Essentially, humans could recycle by eating their own trash, without negative side effects.

The students conducted an initial study on wax moth larvae last year and have submitted a $650 grant request for funding to purchase additional wax moth larvae, enabling them to complete their research.

"We had a colony (of wax moth larvae) collapse on us," Hobson said. As for the bees, they are still on the third floor of the STC. Bessetti will soon harvest some of the honey which she shares with those who have supported her beekeeping endeavors, but she will leave enough for the bees to survive the winter.

When observers look at the bees, they shouldn't be alarmed by the number of dead bees on the balcony. It's all part of the bee's life cycle, which varies from bee to bee.

"They live until they burn out their wings," Bessetti said.

Bessetti said bees spend more than half of their life in the hive until they begin making orientation flights with other bees before going on solitary journeys to gather pollen.

Bessetti hopes to research the medicinal properties of bees with her father, who works as a scientist for a biotech company. It will be another chance for them to work together.

Joseph Bessetti said there's no better source of molecular biology study than in a beehive. "It's always going to be a rich opportunity." 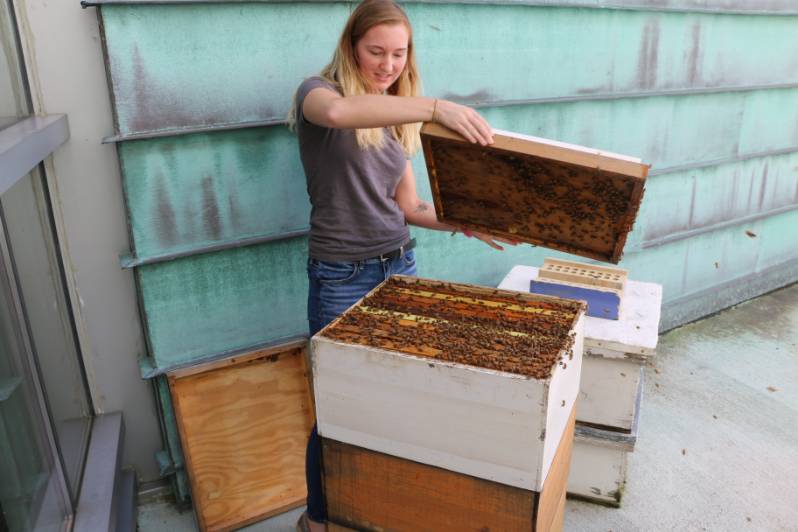 Riley Bessetti pulls the lid off the hive revealing a large number of bees inside. Bessetti estimates that the hive grew to 50,000-60,000 bees. 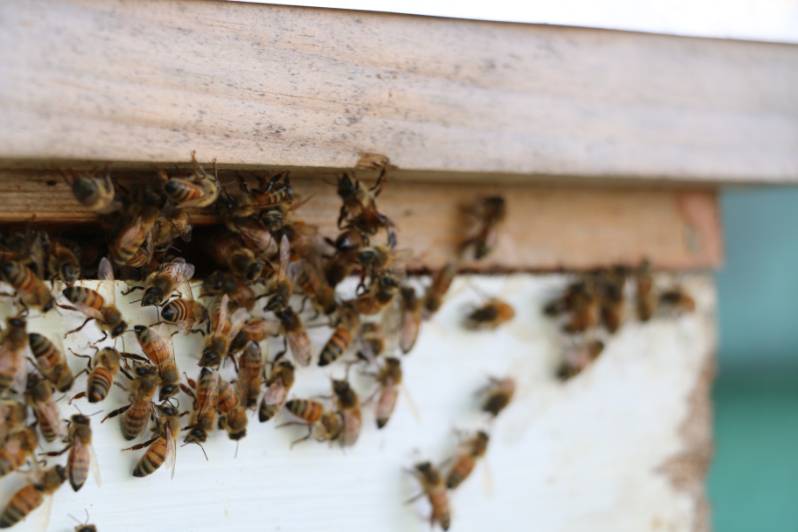 Worker bees are females, who do a variety of jobs within the hive.