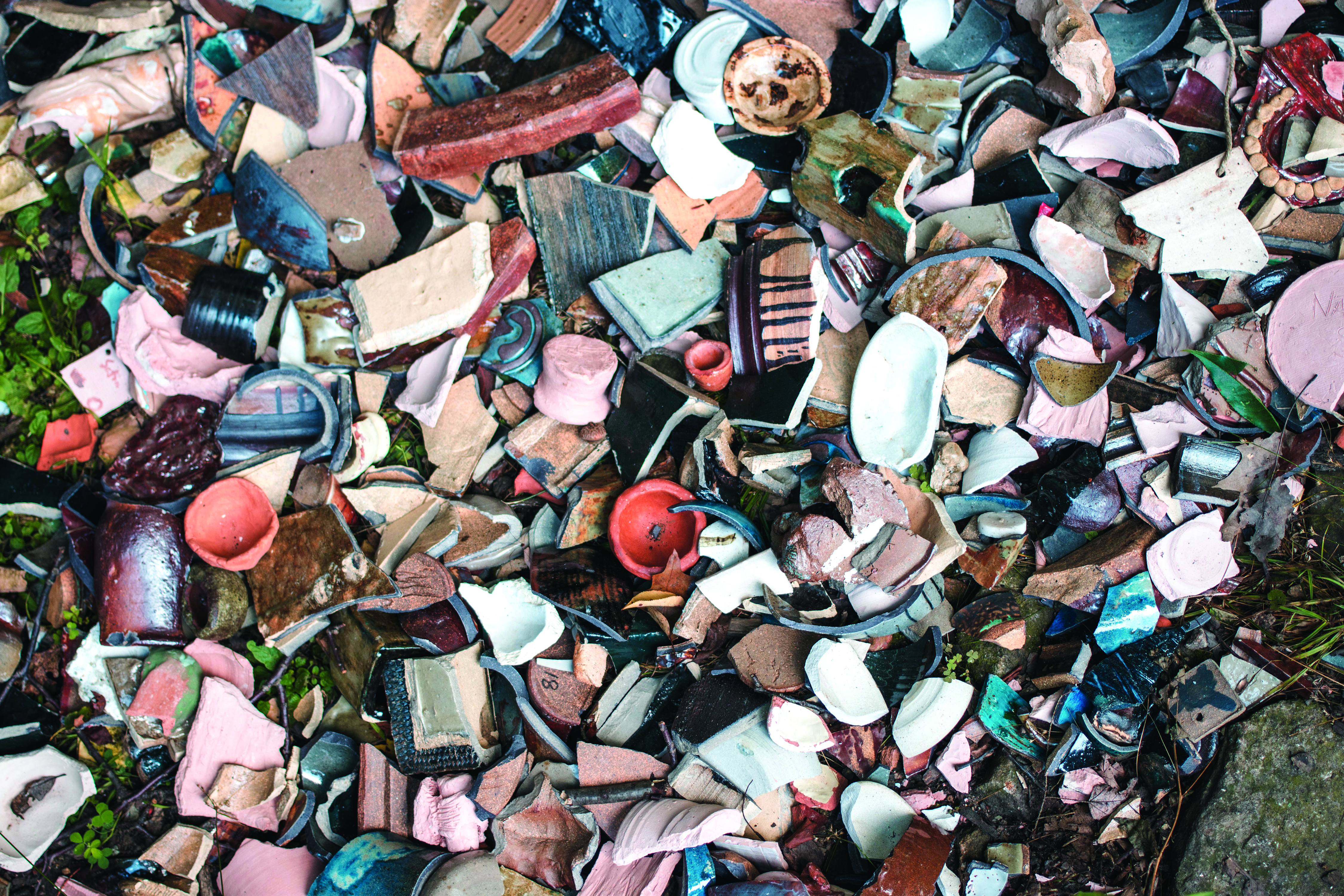 Beside Clarion University's kiln sits a ceramic graveyard — a tribute to all of the times the kiln wasn't so kind to the creations entrusted to it.

A Japanese anagama kiln, measuring 160 cubic feet, may be hidden, but its bright flame reveals itself three times a year when a group of ceramic artists convene to fire the kiln and create unique pottery, touched and treated by the fire and ash.

An anagama kiln has a firing chamber at one end of the kiln and a flue at the other. While the fire originates in the firebox, as it is fed, it spreads from the firebox to the entire kiln, encompassing its contents.

Firing the kiln is a labor of love and time.

At the 69th firing of the kiln last August, Clarion University assistant professor of art Gary "Greeny" Greenberg explained the work that goes into firing the kiln and the ceramic pieces it helps to create.

"People snake pieces in," Greenberg said. "How you put pieces in affects the flow of the shadow."

In other words, those loading the kiln must be wary of overloading or under loading, as both will affect the exposure of the pots to the elements inside the kiln.

Not everyone prefers a glaze on their pottery.

Oil City potter and Clarion alumnus Frank Rodgers ('09) likes to fire some of his pots without glazing them.

"Every clay body has its own inherent glaze to begin with," Rodgers said. "I don't glaze a lot of my porcelain."

Loading and arranging the pieces in the kiln can take 10-12 hours. At the August loading, there were the usual mugs, teapots, urns, pots, plates and vases. Greenberg said often the simplest piece has the best reaction in the kiln.

"Sometimes it'll be a really simple thing, and when it comes out it's the very thing that makes everyone go, 'Oh!'" Greenberg said.

Once the kiln is loaded to everyone's satisfaction, participants start the fire and must continue stoking it for the next 36 to 48 hours to bring the kiln to the right temperature of 2,400 degrees Fahrenheit.

Rodgers said the fire is so hot that anyone who is adding wood or stoking the flame can't wear polyester, as the temperature will melt their clothes off.

Greenberg said the process begins by burning two 2-by-4-foot pieces of wood in the kiln every 30 minutes, then, by the end of the process, adding the same amount every two minutes. At that point, the fire consumes the wood as fast someone can throw it in. Greenberg estimates that the process burns two-and-a-half cords of wood.

While the fire is burning, observers will see flames shooting out of its chimney. It is the appearance of this flame that determines the rhythm of stoking.

Participants at Clarion's August firing began on a Friday evening and finished around noon Sunday. It's those in-between times that Greenberg loves. The participants eat and trade horror stories (of which there are many) from the times when the kiln wasn't so kind to their creations.

"It's one of the reasons I like doing this. People just sit and talk," Greenberg said.

After the burning period, the participants go home and wait for a week. Greenberg said they could open it after a few days, but the kiln is still too hot so it's better to wait a week. Even then, the back portion of the kiln is still uncomfortably hot, he said.

Potters must be patient, as it takes time to make the creations and really learn the craft. George Tomkins of Yuma, Arizona, said he's still learning things about pottery – and he's retired. Tomkins was a ceramics professor and gallery director at Arizona Western College.

The national ceramics conference, hosted by the National Council on Education for the Ceramics Arts, was held in Pittsburgh last year, and it drew 6,000 teachers, students and artists, Greenberg said.

Some people might be surprised to discover how many locals are interested in ceramics in the Clarion area.

"It's a pretty interesting cross-section of people," Greenberg said of the ceramics community.

Greenberg, himself, fits the mold of an artist, with long hair and a long, handlebar mustache. He has a method for keeping his mustache out of the crosshairs of the clay and flames. Sometimes he takes a bandana and pulls it up over his face "like an old train robber," he said.

However, he said famous potter George Ohr had an even bigger mustache and simply tied it behind his head while engaging in his craft.

Greenberg's look also has been copied by a student who dressed up as him for Halloween one year. The wig from that costume now graces a skeleton – Skully Greenberg – that hangs near the kiln. The skull was crafted by a chainsaw artist who shared a studio with potters who participate in university kiln firings.

In addition to Skully, the university's kiln features other interesting aspects. To the side of the kiln is a pottery graveyard where thousands of ceramic shards have become part of a growing installation of pieces that will never be used for their intended purpose. Instead, they have a new purpose of reminding the artists that some things don't work out as planned.

"Now I just clean out the studio every year," Greenberg said of the pile of pottery shards.

The pile grew after the kiln was slightly over-fired at the last August firing. Greenberg said there was too much empty space at the front of the kiln, which made for more heating than usual.Those are the types of learning experiences to which Greenberg and Tomkins were referring. It's also part of the reason Greenberg enjoys his job.

"I've got a lot of former students at these firings."

"Ceramics is love," Lowrey said. "It's more than just a cup."

His dad uses a coffee mug made of clay from his own property.

"I think there is a distinct connection to our ancestors," Lowrey said. Lowrey said that each ceramics piece is unique, because you can never fully replicate what the kiln will do to the glaze. 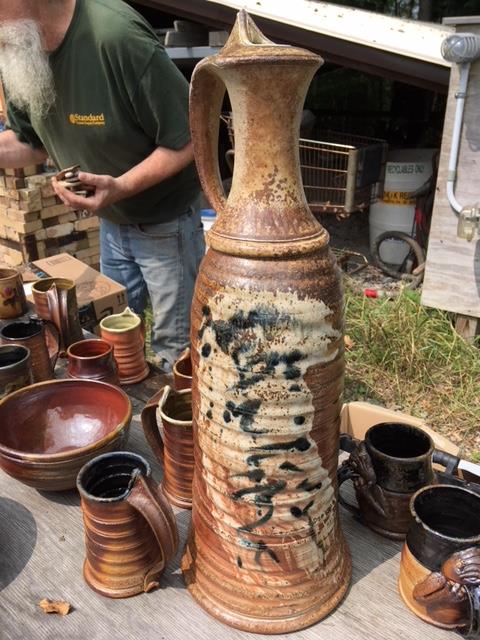 The finished product varies depending upon where the items are arranged in the kiln and how the elements interact with each piece. 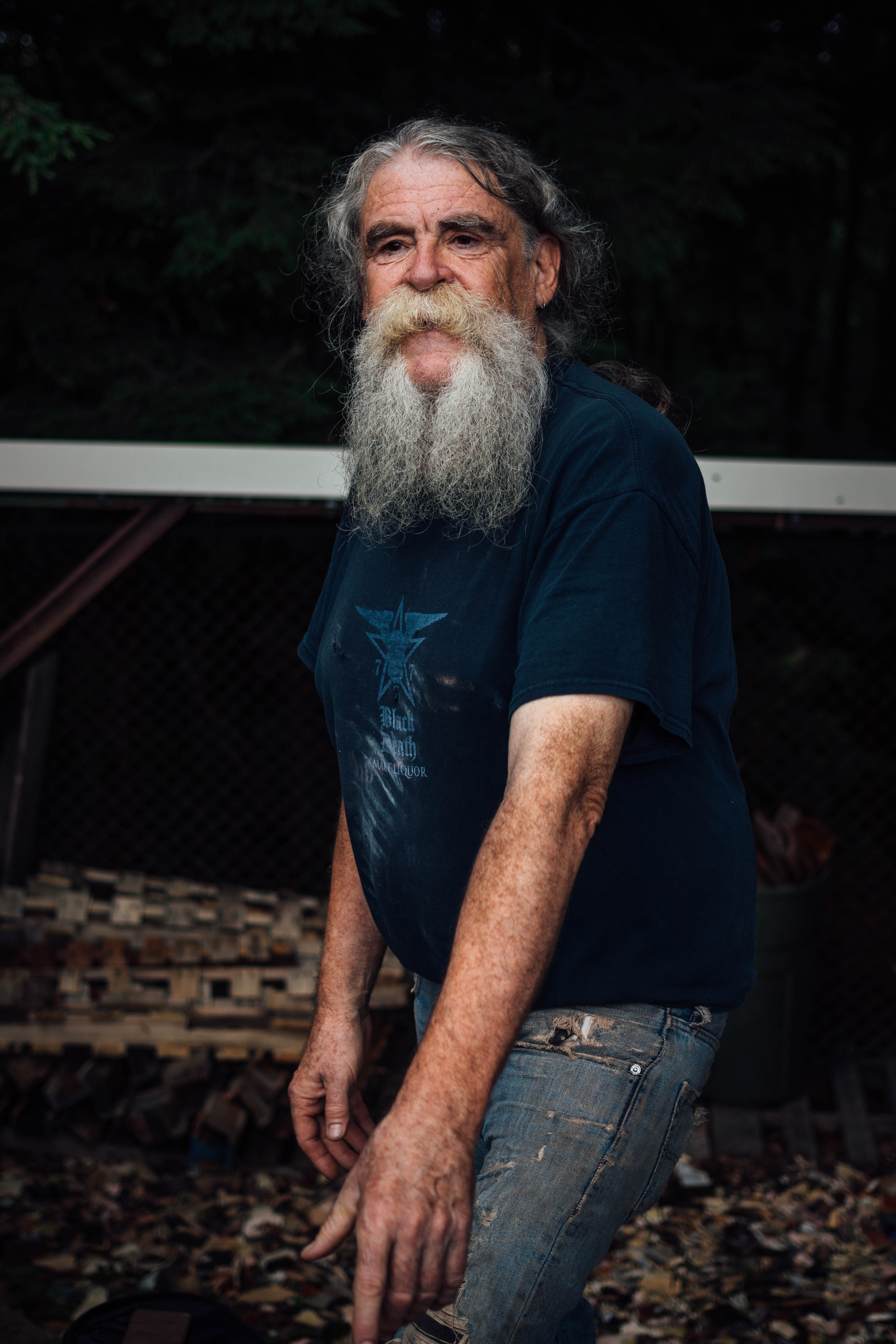 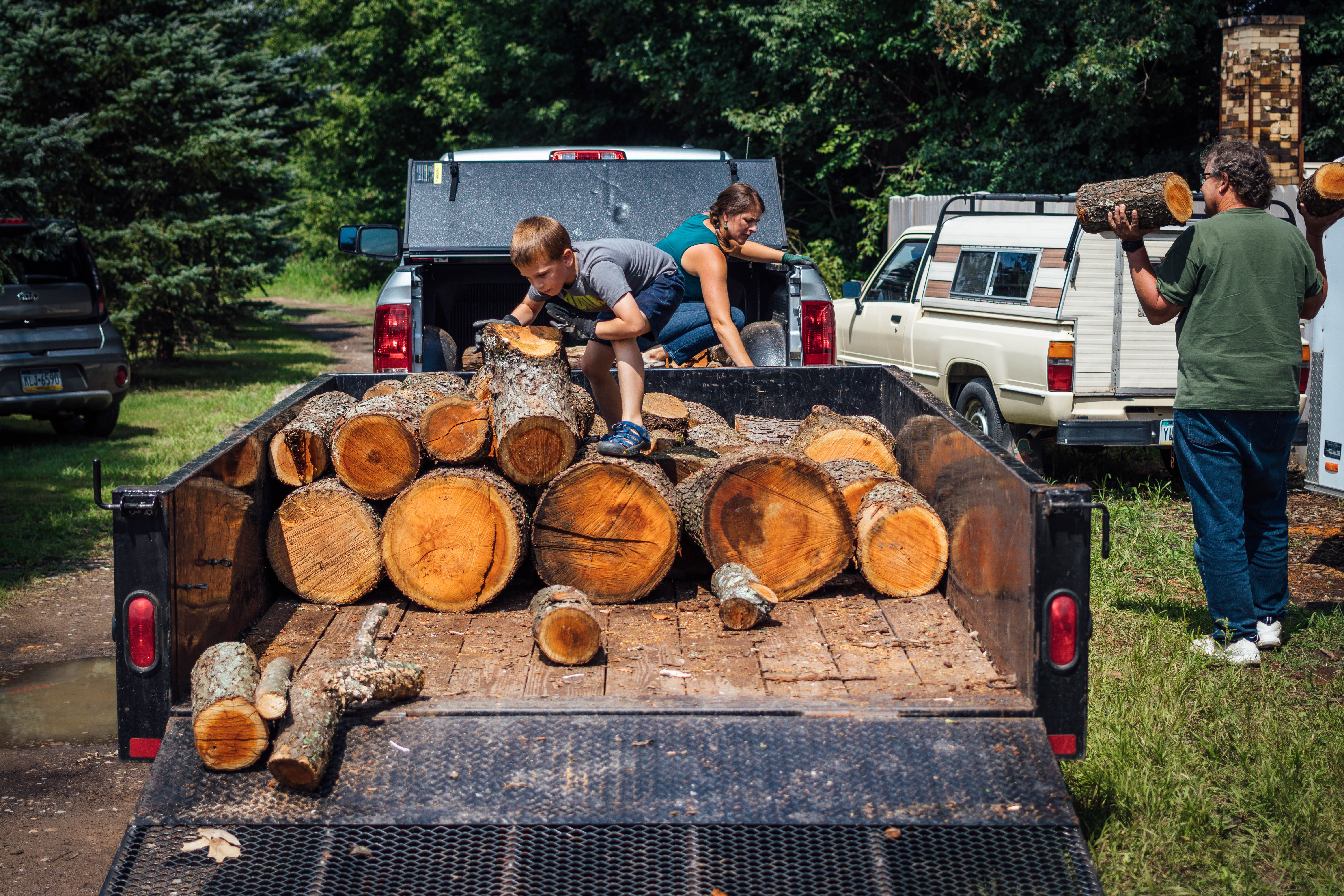 It's all hands on deck to feed the fire of the anagama kiln. Once the fire gets going, wood is consumed as fast as it can be thrown onto the flames. The process burns two-and-a-half cords of wood. 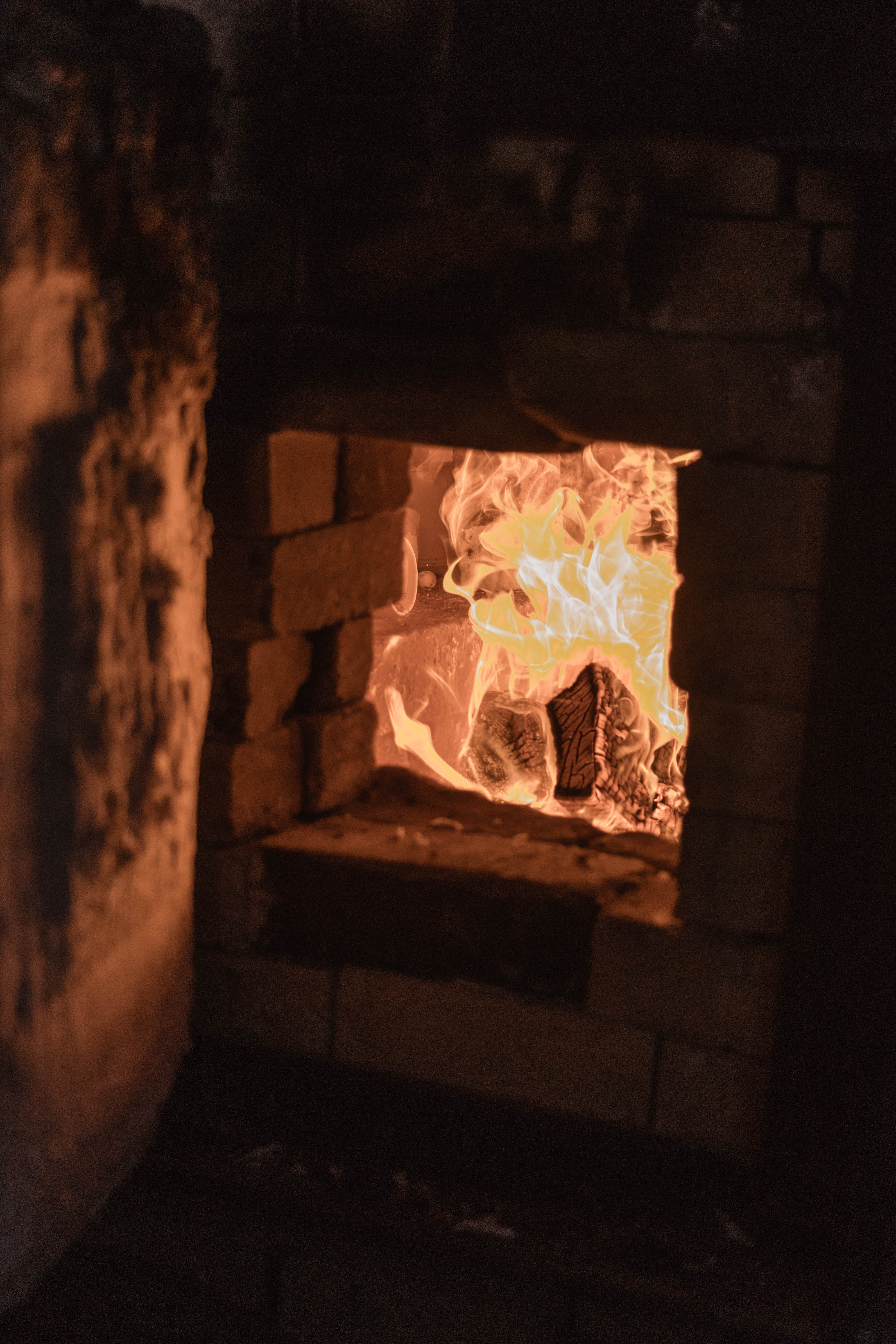 This fire will become so hot it will melt your clothes off if you're wearing polyester. The right temperature for the kiln is 2,400 degrees Fahrenheit. 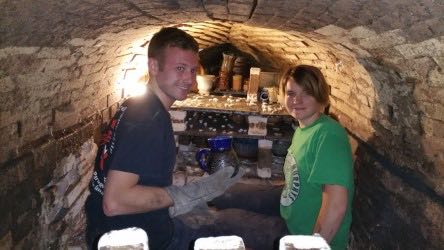 Whether you are loading or unloading the kiln, it's a delicate process fitting pieces together in tight quarters.