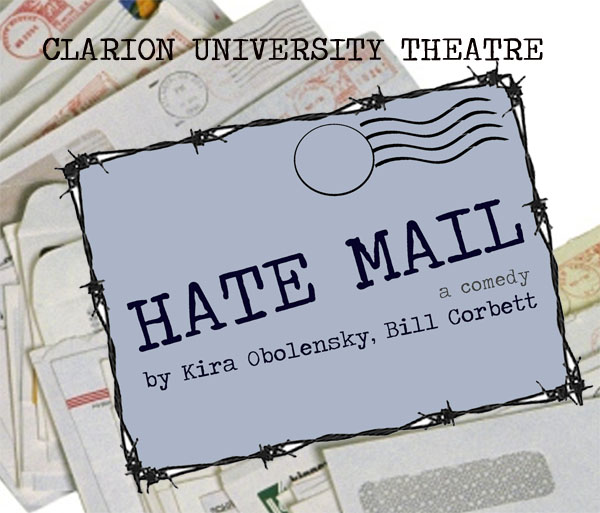 Marwick-Boyd Little Theatre may be closed, but Clarion University Theatre is open and running. The first offering of this year, “Hate Mail,” a comedy by Bill Corbett and Kira Obolensky, will stream online Oct. 7-11.

The comedy follows the on-again, off-again relationship between Dahlia, a New York artist, and Preston, a snobbish Midwesterner who first begin corresponding with an angry complaint letter concerning a cheaply made souvenir purchased at the shop where Dahlia works. The story is told through their letters, sticky notes and computer chat.

"Rehearsing and performing remotely is a new and sometimes frightening experience," said director Robert Levy. "The theatre has long been dependent on a gathering of actors and audience; that is complicated these days. For the safety of our actors and audience, we and the entire industry are experimenting and discovering new ways to create that intimacy with available technology."

The production is stage managed by Abby Stone Huchko of Burkettstown, assisted by Dayse Laslo of Emlenton. Costume design coordination is by Dakota Hall, a costume design major from Bradford. Scenic and properties coordination is by Caitlin Morgan of Milheim, supervised by Clarion faculty technical director Edward J. Powers and Julie Findlan-Powell. Video technical direction, allowing the performances to be streamed, is by seniors Benjamon Fye of Woodland and Zachary Rupp of Nottingham, Maryland.

Tickets and a link to the on-demand stream are available at www.clarionuniversitytickets.com/events. "Hate Mail" contains adult language and situations that may not be suitable for younger viewers.