Clarion recognized as one of the safest colleges in America

Clarion University is one of the safest schools in America according to two organizations that have included Clarion on national lists highlighting safety.

Clarion is the third safest school in Pennsylvania according to Security Center's ranking of the nation's safest schools in 2019. The university ranked 16th overall on the list, which was determined based on four main factors to determine campus safety including:

"These factors were calculated based on every 1,000 students, females, or residents in each location," as stated on Security Center's website. 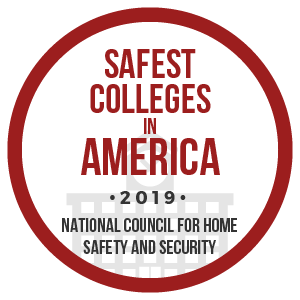 Clarion also appeared at No. 155 on the National Council for Home Safety and Security's list for Safest Colleges in America for 2019.

"Not only have we taken data submitted to the FBI, we have also reviewed this data relative to the surrounding area of the campus," stated the National Council on Home Safety and Security.

In addition to these stamps of approval, the Clarion University Police Department has earned accreditation by the Pennsylvania Chiefs of Police Association, making it one of seven university police departments in the state and the only department in the Pennsylvania State System of Higher Education to attain the status.

"Accreditation is a progressive and time-proven way of helping institutions evaluate and improve their overall performance," according to pachiefs.org, the website for Pennsylvania Chiefs of Police Association.
The department, led by Chief Jason Hendershot, was assessed on 132 standards, 32 of which were not applicable. When Hendershot came to Clarion in January 2015, departmental accreditation was among his goals.