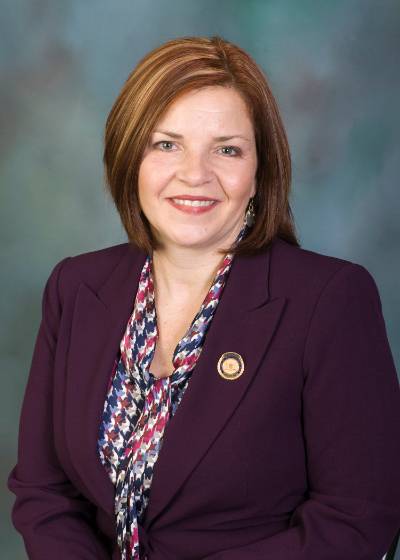 Pennsylvania Rep. Donna Oberlander, a member of Clarion University Board of Trustees and a 1991 CU graduate with a bachelor’s degree in political science, has been chosen to become the first woman to serve as Republican Caucus whip during leadership elections held at the state Capitol in Harrisburg.

"I'm honored and humbled that my colleagues have chosen me to serve as their majority whip," said Oberlander, who also becomes the first state representative from the 63rd District to ascend to the position, which is considered the third highest in the House Republican Caucus. "I will continue to represent the members at the leadership table and ensure that their concerns from all over the commonwealth are listened to. We have a unified leadership team, which is imperative during this critical time in our state, as we work toward a strong recovery from the COVID-19 crisis."

As majority whip, she will be responsible for tracking House votes and informing her other 109 Republican colleagues on upcoming issues and legislation.

This is Oberlander's third role in House Republican leadership. She was elected as caucus secretary in 2014 and majority Policy Committee chairman in 2018, a position she has most recently held.

"As I have done as majority Policy Committee chairman, the residents of 63rd District remain my top priority in the House, and this elevated leadership position allows me to ensure that their hometown values and principles are heard when major policy and budget decisions are made in the Pennsylvania General Assembly," Oberlander added.

Oberlander was initially appointed a Clarion University trustee in 2009 and reappointed in 2012.

The new leadership team takes effect immediately and will serve until the end of the current legislative session on Nov. 30.