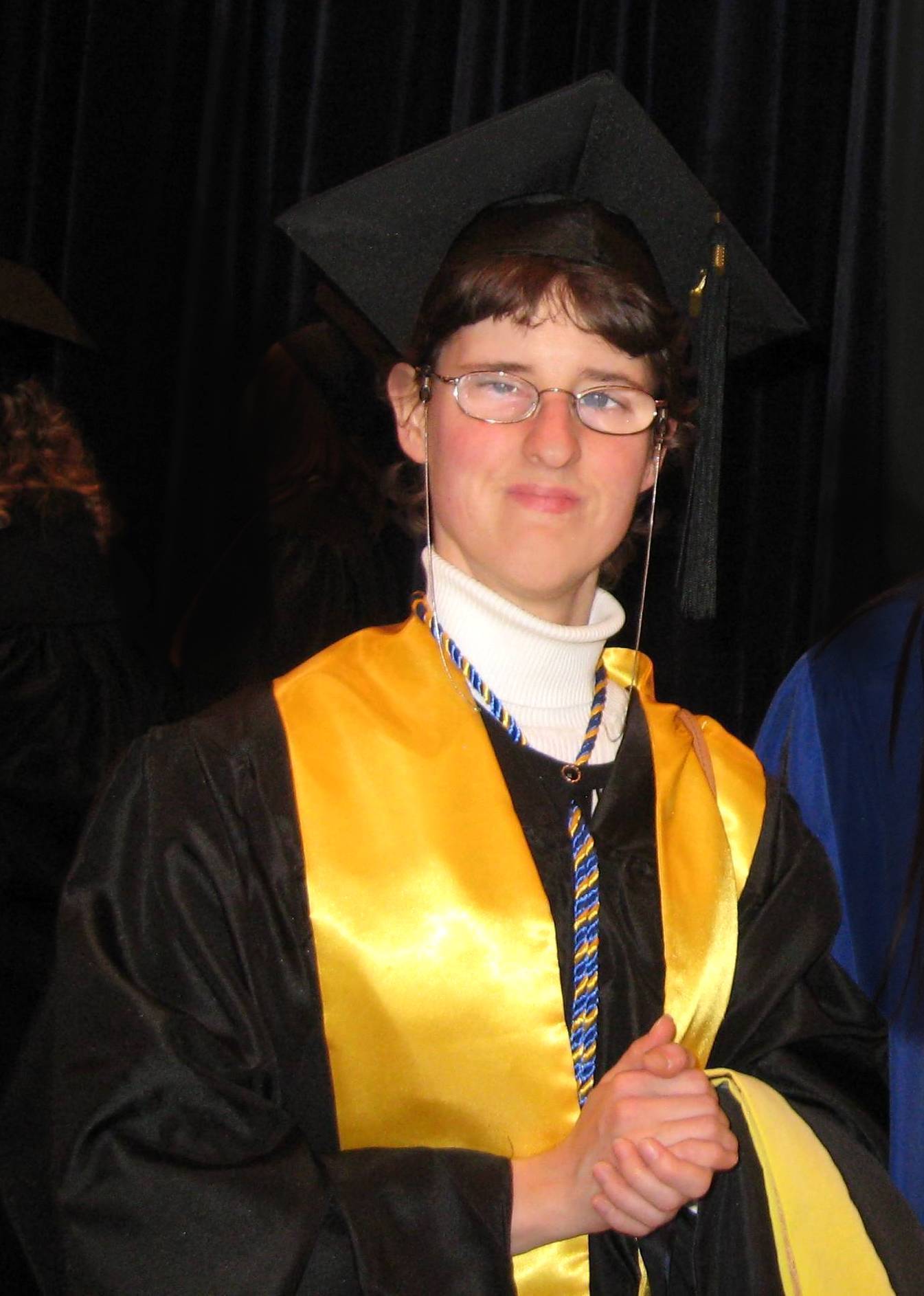 Barbara Gorski received her Master of Science in Library Science degree from Clarion University on May 10th, 2014. It was the first time that she had actually set foot on campus. Her visual impairment has not gotten in the way of her successful completion of three academic degrees in the pursuit of a career as a librarian.

According to the Stewartstown, PA resident who overcame her problems with vision, “When you study online, nobody knows if you have a disability, so you are not treated as a special student. Everyone is evaluated on his or her own merits and according to the final output. The lectures, whether audio or video recordings, were helpful, especially those with text that could be enlarged on the computer screen. I could listen to the lessons multiple times and slowly make notes instead of rushing and missing some points, as in a classroom.”

Gorski had attended her previous college on campus but found it difficult to live in a dorm because she is unable to drive, and the home that she shares with her mother and father is four hours away from Clarion University.

“I had chosen Clarion,” explained Gorski, “because it was convenient for my schedule and less expensive. Additionally, the program would prepare me for a variety of positions, like a library cataloger and a researcher in an academic environment.”

Gorski found several courses in the major perfectly suited to prepare her for her chosen field.

“In the Cataloging and Classification course, I was introduced to the Dewey Decimal System, the Library of Congress Classification System, and the RDA System. Also, I learned about the formation of a MARC record. In the Bibliography of the Sciences course, taught by one of my favorite professors—Dr. Marsteller, the information sources and services found in science and technology database collections were also very helpful.”

Gorski explained that one of the projects in the latter course was to select an accomplished, young scientist and study the information-seeking behavior of this individual. “At the same time, I learned about the scientist’s work and the needed materials for her research projects.” Gorski also appreciated the challenge of developing a budget for science, medical, and engineering library collections. “This course was like a hands-on job for me for my future work in an academic library,” she said.

Gorski also got the opportunity to interact with fellow classmates via the online discussion boards. She explained, “Each week, we would post our assignments for the class to read and evaluate, and then we would respond to what other students had written.”

Another valuable course was Information-Seeking Behavior in User Interface Design, instrumental in Gorski’s educational success. “The professor, Dr. YooJin Ha, was very sweet and helpful, so I was able to correct my assignments if I had done something wrong.”

One of the most significant projects, and the one that hit home for Gorski, was the prototype of the Interface Design Project: She developed a hypothetical website that would provide information about assistive technology for application in schools with special education classes and beyond. The site featured an array of devices like Victor Reader Stream and Zoom Text, which would help to improve the lives and the learning process of people with disabilities.

In her spare time, Gorski enjoys reading and writing science fiction and fantasy, playing the piano, and practicing yoga and aerobics. For the last few years, she has been accepting volunteer work at local libraries, like the Paul-Smith Library in Shrewsbury.  Volunteering gives her valuable experience for a future position in the field.

According to Gorski, “I really want to stay in the York, Pennsylvania area, but I am seeing so many excellent positions advertised in academic and public libraries, such as in Florida. I may be planning a move in the near future, where jobs will be more available and accessible by public transportation.”