Barbara Morgan Harvey Center for the Study of Oil Heritage 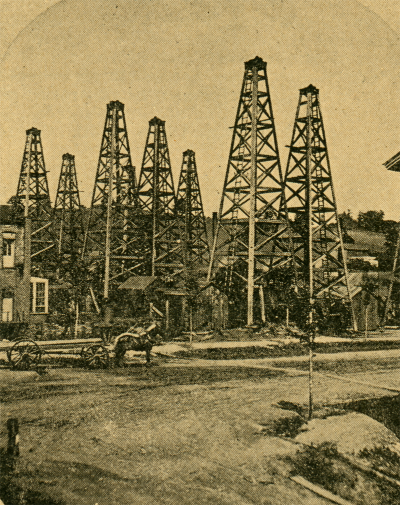 The collection serves as a center and clearinghouse for scholarship and research of the Oil Region's history and heritage. An important part of the collection is videotaped oral histories of residents of the area reminiscing and telling stories about the region.

The Barbara Morgan Harvey Annual Lecture, held in the spring, explores historical, geological,  social, business, and other aspects of the region's growth and development.

Gib Morgan - The Minstrel of the Oil Fields
(April 2019) Sean Miller, a disabled Military Veteran, is a Performer and Historian who grew up in Western Pennsylvania. Learn more about this performer at www.greycloudstudios.com

The Barbara Morgan Harvey Center for the Study of Oil Heritage is located in a section of the Charles L. Suhr Library at Clarion University – Venango in Oil City, Pennsylvania.

Barbara Morgan Harvey was proud to tell people that her great-grandfather, Gib Morgan,  was a famed storyteller in the early days of oil drilling. Known as "the minstrel of the oil fields," he entertained people with his tall tales while working as a drill and tool dresser in the Appalachian oil fields.

In 1949, Barbara married Joseph S. Harvey, a young banker with an oil history of his own. His grandfather, Joseph Seep, was an early oil and banking baron.

Together they raised four children–Joseph, Thomas, David, and Judith. It wasn't until  the children were grown that Mrs. Harvey had time to pursue her interest in oil history, an interest that was to become a passion. She quickly earned a reputation as a source  for Oil Valley information, a tribute that pleased her enormously.

Following Mrs. Harvey's death in 2002, her husband and children lovingly began to inventory her extensive collection, which includes nearly 400 books, various historical documents, and a trove of photographs, business ledgers, and other materials that she collected over the years. They were amazed at the breadth of the collection.

Joe Harvey, a former Clarion University Trustee and a strong supporter of the Venango Campus since its inception, and his children donated the collection to establish a center to offer scholars, students, and the community a place for discussion, study, and documentation of Pennsylvania's oil region. In addition, the Harvey family created an endowment to support ongoing educational activities at the center to bring  that history to life.

Clarion University – Venango is honored to celebrate the life and legacy of this very special woman, whose love of oil history will live on in The Barbara Morgan Harvey Center for the Study of Oil Heritage.