Your Degree At Work 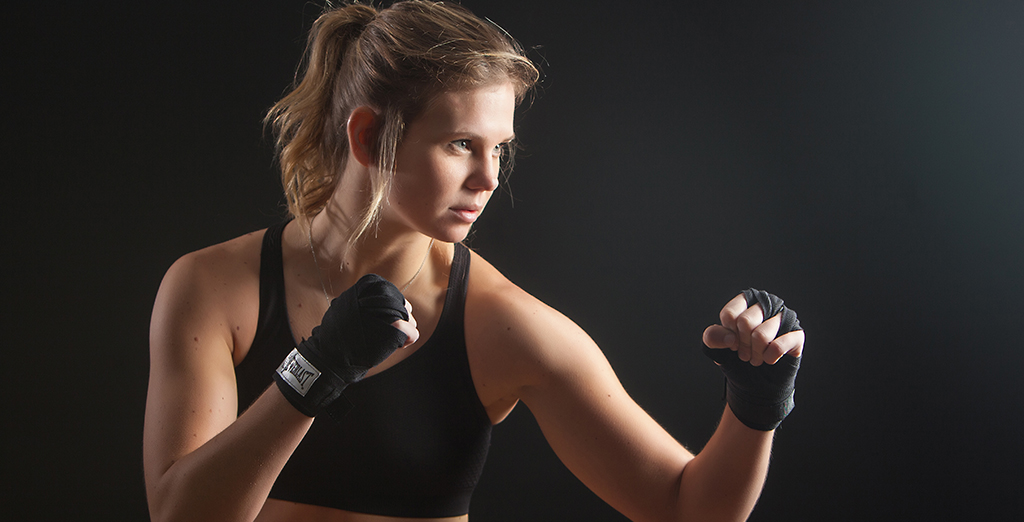 From the time she was a little girl, Erika Keck ('15) has been on the move.

She recalls a time that her mom couldn't find her. The young girl had run a string from the house to outside, rigged up a pulley and was propelling herself through the air, with a trampoline below to catch her if she fell.

"I was always the kid in the hallway doing Spiderman on the walls," Keck said.

Now an adult with a bachelor's degree in communication, Keck finds herself again imitating superheroes. This spring Keck, a stunt performer, began working with Marvel Universe Live, which "brings more than 25 Marvel characters to life on one epic quest," according to the show's website. Keck is an understudy for the Black Widow.

While working alongside Thor could be intimidating for some, Keck is cool about it. On her resume she lists some goddesses of the silver screen for whom she has doubled, namely Diane Keaton and Olivia Wilde in the film "Meet the Coopers," which opens Nov. 13.

Diane Keaton "is so sweet. She sent me a gift at the end of the day," Keck said. "Olivia Wilde is one of the coolest people I've ever met – always ready with a smile and a laugh."

As Wilde's stunt double, Keck raced through a hospital corridor, bumping into things and getting knocked over.
For Keaton, Keck did 12 takes on a ski jump.

"My back hurt so bad at the end of the day," Keck said. "I just smiled and kept doing my job."

"As doubles, all stunt men and women need to act very similar to the character the actor portrays. Staying in character is very important," Keck said. "Some of my mentors have explained to me they watch the actor they are doubling very closely throughout the day. It's kind of like studying on the job."

Would Keck prefer to act rather than double for actors?

"I would take stunt gig over an acting job in a heartbeat," Keck said. Having focused on training for stunt work, she said years of training to be an actor would have to come before she tried acting.

"Copying what someone has already acted is different. Someone has already painted the picture for me how to act. I think that's why doubling comes a little easier to me," she said. "I don't have to create a character. The actress already did it and I just need to stay in character."

It was during her years at Clarion University that Keck fell in love with the idea of being a stunt performer. She didn't know exactly how to break into the field, but she declared a digital media concentration along with her communication major, thinking that knowing the language of the business would help to propel her.

"I did a lot of hands-on classes, which helped me learn set etiquette," she said. "I really took advantage of (the classes) and tried to learn as much as possible."

As a member of Film Club, advised by Dr. Michael Torres, Keck learned what's involved in filmmaking, and she put her skills to work, making films on her own.

When she started to think about internships, she contacted Nancy Mosser Casting, Pittsburgh, where she took advantage of networking opportunities.

Then she was off to the International Stunt School in Seattle.

"The school teaches you how to protect your body – to land on muscle, not anything bony," she said. Her coursework taught her fight choreography, basic falls, stairfalls, stunt driving, wire work and rappelling. 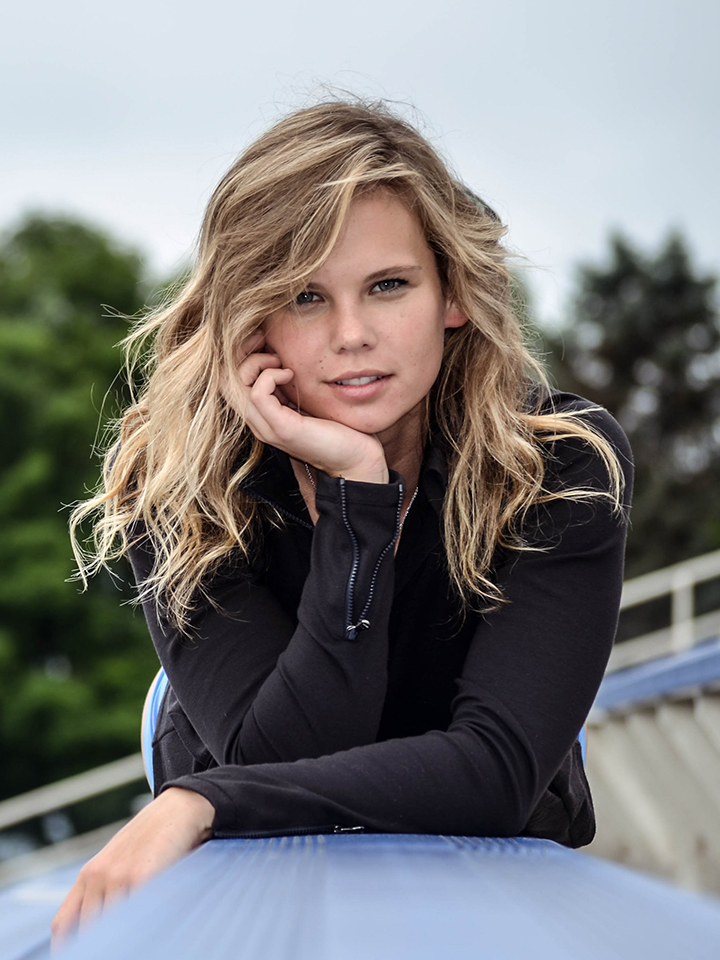 She also experienced being set on fire.

Being set on fire was the coldest thing I've done with stunts. There is a special gel that an under layer of clothing is soaked in. It is very cold and clings to your body. Once I had all of the cotton clothes on over the cold-soaked layer, I carefully walked out to the designated area to be set on fire.

Designated people circle the area as safeties. Each person has a particular job and fallback if something may go wrong during the stunt -- almost like animals ready to pounce.

My instructor carefully spread more of the gel all over my hands and then moves to my head. This was my least favorite part, having all the gel on my face, in my ears, around my eyes and nose.

After preparation is complete, he spread the igniting mixer on the designated spot of burn (my back). At this point, I just wanted the burn to be over with. I wasn't afraid of the burn but I wanted the gel off my skin.

My instructor asked if I was ready. I took a deep breath (you cannot breathe in any of the smoke throughout the duration of the fire burn) and gave him a thumbs up. He set me on fire.

At this point everyone was on alert. I began to move like I'm set on fire. This was my first fire-burn so I moved kind of slowly. Honestly I did not feel any of the burning. The stunt was so safe. I didn't even feel warm for a long time.

Once I couldn't hold my breath any more, I dropped to ground as a signal the stunt was over. One instructor sprayed a fire extinguisher on me while, immediately after, the other instructor started using a water hose (low pressure) and patted me down to make sure all the fire was out.

I was happy that I did the stunt but would rather get paid the next time I do a fire stunt. The prep for me is the worst part. That gel is so uncomfortable to me.

Learning high falls was the most daunting for Keck.

"You're up there at 45 feet," she said. "They start you at lower heights, so I just talked myself through it."

"Stunt school was one of the best months of my life. It was so much fun; everything was intriguing," Keck said.

The profession of stunt performing demands fitness, which Keck delivers. She combines cardio and weightlifting.

"I like Insanity Asylum – it's plyometrics and cardio. I go to gymnastics two hours a week, I do Crossfit for endurance, and weightlifting," she said.

Her "work hard" mentality comes from her father.

"He has owned three small businesses, and he works almost 24/7. He never takes a day off. When I was little, I was always out in the truck with him, learning," she said. "I always had my hands in grease."

Before completing school, Keck worked for her dad, driving the rock truck and excavator.

Keck plans to complete the Marvel Universe Live performing tour before moving on to her next adventure.

When Dan Zangrilli (’07) reflects on his favorite part of his job, covering the Pittsburgh Pirates as their pre-game and post-game host for CBS radio and KDKA’s 93.7 The Fan, he has a bit of difficulty narrowing it down to one aspect:

“There’s so much – the fact that I get to come to a place like PNC Park every day and follow a team that’s on the rise. It’s a good time to be associated with the Pirates. For so long the team struggled, and now the city has rebounded with the team. To be on the radio before and after every game, to live and breathe with Pirates fans and the day-in, day-out ebbs and flows. To interact with the players and be on the beat. It’s a unique position. It allows me to do what I love – broadcasting and reporting – and on a sport I love – baseball.”

Zangrilli decided in his freshman or sophomore year at Keystone Oaks High School that he wanted to be a broadcaster. He was a junior who didn’t yet have his driver’s license and had to ride the bus with the football team when he called his first game. When it came time to look at colleges, the Pittsburgh native looked to the north.

“Clarion’s reputation as a broadcasting powerhouse preceded it. Once you looked into it further, you find out it’s all that and then some,” Zangrilli said.  He also liked that it was close enough to home that he could continue to broadcast high school football games on Friday nights, and later, Clarion University’s football games on Saturday afternoons.

“On day one at Clarion, I was working at TV 5,” he said. He later became sports director of WCUC, then general manager of the station for two years. It’s some of the most fun I’ve had in my life.” He announced football and basketball games for the university, and he said it’s why he’s able to do what he does now.

“The hands-on experience I got, and what I was able to do on a daily basis, especially at WCUC, is why I’m able to do what I’m doing,” he said. “I lived at the radio station, learned editing, engineering, sales and marketing, how to be an on-air personality – it’s doing it and getting the experience.”

In trying to elevate the product (the radio station), he was building his resume.

“You’re in the trenches, working hard and making yourself more marketable. You don’t understand the value at that moment, but it was extremely valuable,” he said.

Two of his most influential professors were Bill Adams and Bruce Exley. “Bill Adams was monumental. Bruce Exley was the engineer at the station. He taught me the technical side of radio – it’s an important skill set I have that others may not, because of what they taught me.”

“I didn’t work in their office, but I worked closely with them. They were so supportive,” Zangrilli said. “They’re university employees, but they might as well be professors. Their impact was substantial. My friendships with them are ongoing, seven years after I graduated.”

He is thankful for how Clarion helped him reach his goals, and to give back, he recently became a member of the university’s Alumni Association Board of Directors.

“Everything I’ve done in my career I can directly link back to the university. I feel I’m in debt to them, in a sense,” he said. “I want to make sure Clarion is as good a place for other students as it was for me.”

Zangrilli said he feels a bit greedy thinking about what he might do beyond his current gig with KDKA.

“This is a field that is so cyclical and volatile. When you’re here, you have to enjoy the moment,” he said. “There are aspirations to take the next step, sure, but I’m so happy doing what I do.”