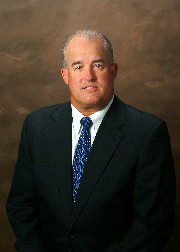 As president, he represented NATA in White House meetings that resulted in the "Stop the Bleed" campaign, introduced a new logo, announced the Japanese Athletic Trainers' Organization as an official affiliate member of NATA, and initiated ATs Care, an international program that provides peer support for athletic trainers dealing with a crisis or critical incident. 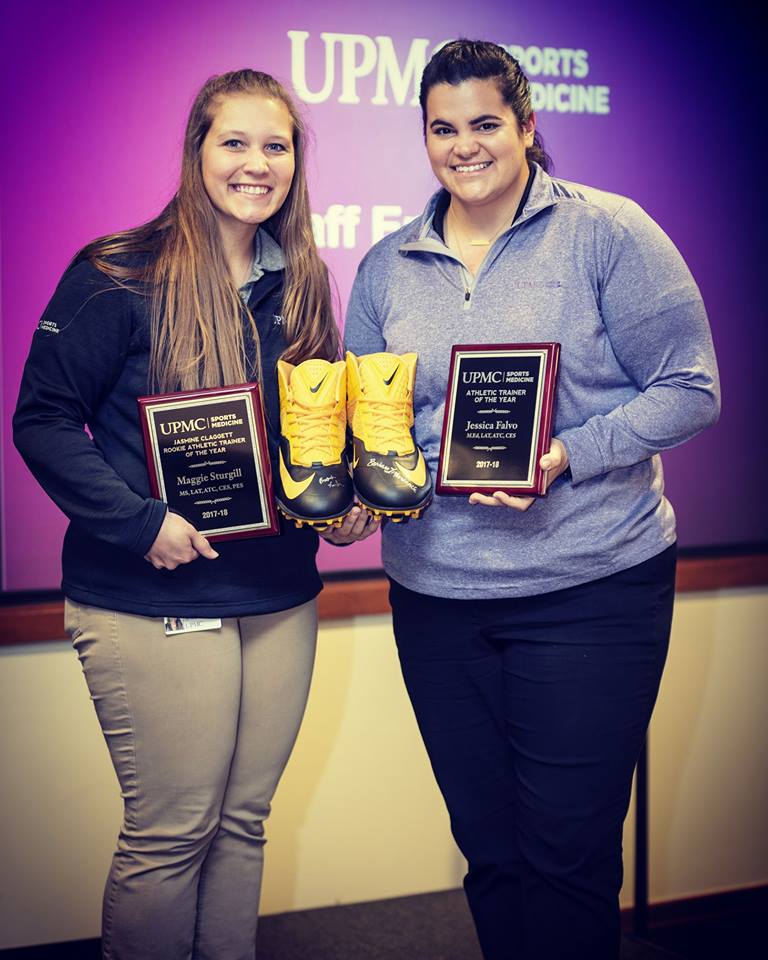 Alums Maggie Sturgill and Jessica Falvo were recently awarded the Rookie Athletic Trainer of the Year and the Athletic Trainer of the Year awards, respectively. The awards were handed out by UPMC Sports Medicine. Both graduates are alums of the former athletic training program, which was a joint venture with California University of Pennsylvania. While this program is no longer offered, Clarion now features a Bachelor of Science in liberal studies with an athletic coaching concentration. A master's degree in athletic training has been approved and will be offered in the fall. Below the graduates discuss their time at Clarion and their work life.

Sturgill: I graduated in 2012. I immediately started in the athletic training major when I began at Clarion and continued with the program until I graduated. When I was growing up I spent many years with my dad who coached several sports. While he was coaching there was always an athletic trainer who would help anyone who was injured. Then when I had broken my own ankle, I knew I wanted to be an athletic trainer. I decided that I wanted to take care of others while having the joy of watching sports.

Falvo: I graduated in 2009. I began as a dual major in art and communications, but changed quickly after working as a sports writer for the Clarion Call. I spent a lot of time with many of the AT majors and loved what they were studying. After much thought I ended up switching my major at the end of my sophomore year. I made it sound like an easy switch, but I had a lot of push back from people, as athletic training was not a popular degree at the time. This was the first major life decision, aside from choosing college, that I made all on my own.

Sturgill: Making the transition from a small town where everyone knows everyone to coming to Clarion was fairly easy for me. Half of my graduating class from high school also attended Clarion. So when I started I already felt at home knowing so many people from my hometown. When I started at Clarion, I will say I didn't really have my own voice, but with my classmates, teachers, athletes, and friends I was able to grow into my own person and have my own voice. Some of my classmates I still talk to today and it has been six years since graduating.

Falvo: I really grew into my own person throughout my time at Clarion. I developed my own voice and found I really enjoy communicating with people and helping others achieve their goals. It was not as profound of a find as it is to me now, but I met so many people as athletes, cohorts in athletic training, and friends, who I now interact with almost 10 years later. The community of Clarion kept popping back into my life later after grad school - I ended up at one point becoming the athletic trainer at Clarion Area High School, and it was a full-circle experience working with the kids of one of my professors, Jim "Thunder" Thornton.

Sturgill: I currently work at UPMC Sports Medicine as an Athletic Trainer I. I am contracted as an athletic trainer for Springdale Jr/Sr High School. After graduating I worked in a physical therapy clinic as it was hard for me to find a full time job in athletic training. After five years from graduating and thoughts of going back to school for a different degree, I finally got a full-time job with UPMC. Falvo was one of my mentors during college and I still reach out to her for help and guidance today. I truly wouldn't be where I am today without her help and inspiration. My degree was specific to the positions I have had. Also, I loved my time at Clarion and I do not think I would be who I am today without those experience I had there or the friendships I made.

Falvo: I currently work at UPMC Sports Medicine as an Athletic Trainer II. I am contracted as an athletic trainer for the Pittsburgh Public Schools - Brashear High School, where I work with a diverse athletic population in the heart of Pittsburgh, PA. I also work alongside former Clarion alums Stephanie Harrison and Jordan Daloisio as the head athletic trainer for Steel City F.C. - the first women's semi-professional soccer team in Pittsburgh. I am currently in charge of staff engagement within our athletic training department of 100-plus athletic trainers. My degree was specific to this type of position, and I have never had trouble finding a job, or a job finding me. My experiences at Clarion allowed me to meet so many diverse individuals, I truly believe it set me up to succeed professionally and socially. I was heavily involved in athletics. I forged friendships with athletes from each sport, many of whom I still see around now as coaches. As a student in the athletic training program, we also had the opportunity to travel to conferences for our profession and meet so many amazing people. I even sat as a member of student delegation for the Eastern Athletic Trainers' Association, which would never have happened without the support of my educators at Clarion. 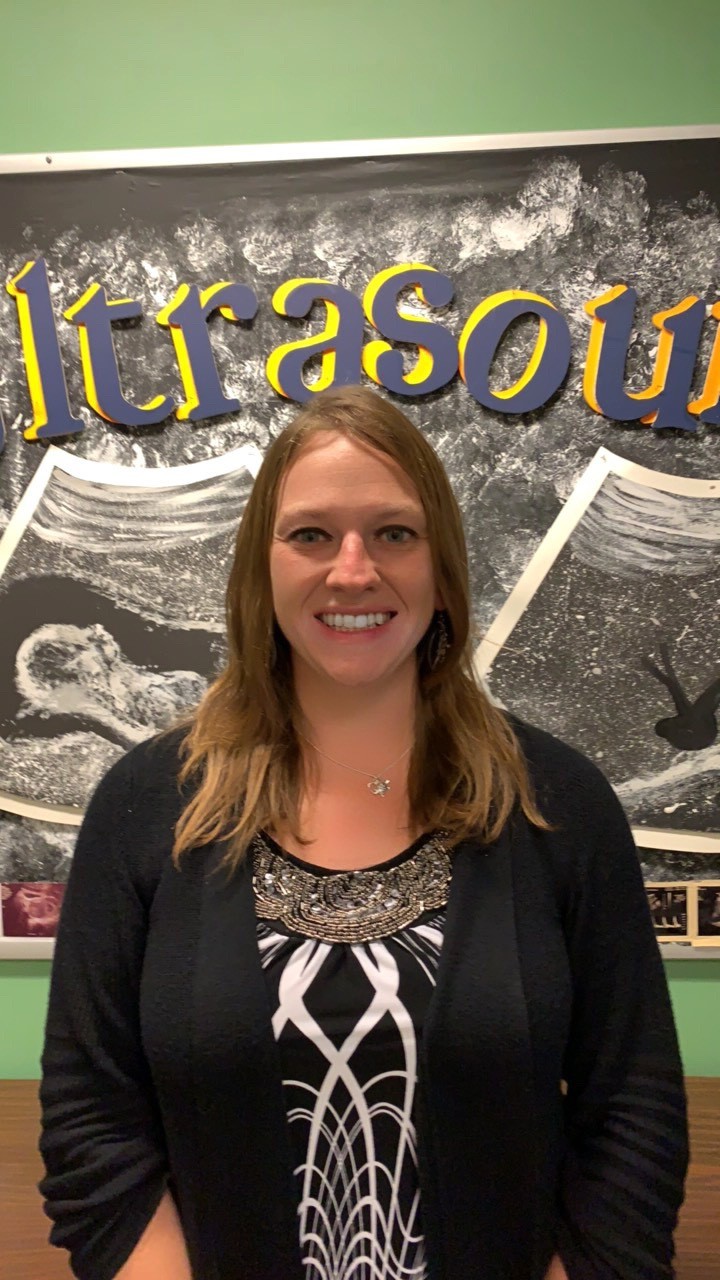 I flourished in the field of sonography and I had a desire to make a positive impact on those I encountered within the radiology department. I began by taking on the role of clinical liaison for sonography students. To me, it was a very rewarding experience to watch students gain knowledge and apply what you have taught them for entry-level positions.

When Clarion University and Great Lakes Institute of Technology formed an affiliation to make the sonography program a Bachelor's degree profession, I took this opportunity to expand my knowledge on many levels that have positively impacted me in my new career as the Diagnostic Medical Sonography program director at Great Lakes Institute of Technology.

I chose Clarion University not only for the affiliation, but also for the variety of classes I could choose to fulfill my degree requirements were in abundance. I was able to choose what I felt would best suit me for the career path I was intending to follow. My original plan was to go in to hospital administration, so I focused some of my requirements on courses that would better prepare me for a leadership position, such as business writing and the allied health leadership capstone, as these classes would instill very important set of skills needed in the professional world when communicating with others.

As a distance learner, Clarion University was an excellent choice. This allowed me to focus on my family, work full-time, coach youth hockey and run a small farm all while continuing my education. It enhanced my time management skills as there are still deadlines for weekly assignments and exams. Prior to my graduation from Clarion University, I was approached with the opportunity to become the program director for the diagnostic medical sonography program. With the education I received from Clarion, as well as my extensive experience as a sonographer, I felt well prepared for my new role. I am now able to perform all the roles I wanted to within the local medical community, a rewarding career educating future sonographers as well as lead excellent faculty towards a successful career as teachers and mentors!

I recently applied to graduate school and I chose Clarion University to continue my education. I was accepted in to the online Master's in Education: curriculum, instruction and teacher leadership program for spring 2020. I look forward to embarking on this next journey in my life utilizing Clarion University and their knowledgeable, compassionate faculty to give me the skills I will need to mentor, lead and inspire those that choose a future in ultrasound. Thank you Clarion for this meritorious education and life experience.